London, Ontario has historically been a central hub of education and research. The city brings a large number of musical acts, artistic exhibits, and festivals to Ontario ear after year. Aside from being the regional center of education and health care London, Ontario has a new set of bragging rights. The home of Canada’s first and only eight player free roam virtual reality experience. Chad Boutros started on the venture of making Dreamland VR powered by VR Studios Arena a reality last year, and is expecting to open his doors sometime after February 1st.

After much research and review of the available arena systems, Mr. Boutros realized the technical ability involved and he knew his best option was to find a partner who not only could supply the hardware, but the support a business at this level requires to execute and open successfully – on time.

Looking Glass Services, Inc.,located in North Carolina, is the exclusive east coast representative for the VRcade Zone and VRcade Arena Virtual Reality Entertainment Systems sold by VRstudios of Seattle, Wa. They provide account management, deployment of the hardware and training and support services for the VRcade systems.

Their knowledgeable sales staff were always, and still are, available to help Mr. Boutros with his questions and education of the attraction and it’s requirements.

Next to the movie theater, a giant project is finishing construction. Touting a 2,300+ square foot play arena, a classy lounge, and multiple interactive stations; Dreamland VR will be a completely one of a kind attraction.

The massive play area called the VRcade Arena is able to support up to eight players working together seamlessly in the same environment. The game it is launching with is called “Terminal 17”, which features two 15 minute segments or a full 30 minute experience depending on the player’s choice.

If you choose one of the two smaller segments you can expect to have a chance to defeat one of the epic bosses, while the 30 minute segment is broken up into two immersive boss battles. This game play mechanic makes immersive gaming on a strict schedule not only possible, but a ton of fun. 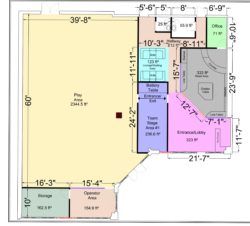 The fun doesn’t end there. The custom built experience is powered by Oculus Rift head mounted displays and all cords and wiring are contained in the players backpacks. Getting into the experience is similar to gearing up for laser tag equipment wise. Once strapped in you’ll be able to walk around, see the other players, and get into the game.

The other players names are displayed above their avatars along with their health bars, making it easy to keep track of what’s going on in game. The in-game positional voice chat feature makes it easy to communicate with your team and plan in-game strategies.

If you’re a Twitch user, there’s an extra bit of fun that is available to you. You’re able to sign on to your Twitch account in game and stream your experience to your friends, fans, and followers. 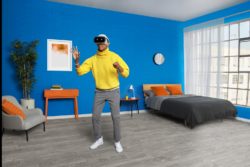 Not sure if the arena is meant for you? No worries, Dreamland VR powered by VR Studios Arena is also launching with other smaller virtual reality experiences. Powered by our favorites: the HTC Vive, PSVR, and Oculus Rift.

In the second quarter of the year the Lonovo Mirage Solo with Daydream is expected to make an appearance as a playable feature at Dreamland VR. This headset is the answer the industry has been waiting for. With no cords, need for a PC, or a phone it is truly the first all-in-one standalone device.

Not only does it provide the tether-less future we’ve been waiting for, it doesn’t require any additional hardware or apparatus to do full immersive motion tracking. Don’t let appearances fool you, this small headset packs a mighty tech punch. Powered by the Qualcomm® Snapdragon™ 835 VR platform – specifically designed just for virtual reality development and 4GB of RAM this headset doesn’t even break a sweat giving users a 110 degree field of view.

This direct extension of VRstudios will be the first of its kind in Canada to offer this type of gaming and interactive experiences. While the launch date has been tentatively set at the beginning of February, it is subject to change. Owner and lead operator Mr. Boutros has already confirmed that once this location is fully established he will be offering franchise opportunities to any interested parties or individuals.