And so begins the rise of the “VR-MMORPG” or “Virtual Reality – Massive Multi Player Online Roleplaying Game”.  Since the dawn of video gaming, gamers have dreamed of a virtual world so immersive that the line between the virtual world and reality disappears entirely. A way to fully interact and be inside of their games.

In just 60 years the technology has advanced from small simulated boxes floating before your eyes, to playing a real piano using nothing but your eyeballs.

While movies like The Matrix make the promise of controlling an entire world around you virtually seem far off, the future of the virtual world is closing the gap at a breathtaking speed. While the future of MMORPGs and virtual reality may not be extensively financially backed by large corporations, there are several promising virtual experiences already currently being crowdfunded.

What is a MMORPG? 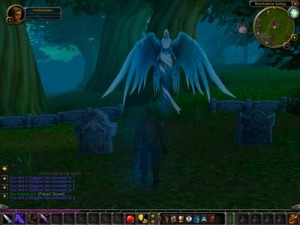 MMORPGs, or “massive multiplayer online role playing games”, refer to a sub-genre of gaming that allows for multiple players to connect in a large open or semi-open world together through the internet. World of Warcraft, Final Fantasy XXIV, The Elder Scrolls: Online, and Guild Wars are some of the highest traffic MMORPGs currently to date. These games allow the user to assume a new role besides the one they represent in the real world. Summoning creatures, raising the dead, and shooting lightning from out of your palms are all possible in MMORPGs. While some players may make their avatars look just like their real physical being, most players take full advantage of the creative end in character creation and assume roles quite different than their day to day selves.

Critics, other gamers, and the sometimes general public often chalk MMORPG players up to those with no social lives, but the reality is the complete opposite. Inside these worlds are hundreds, thousands, and even millions of players that are looking to break the monotony of daily life, but NEED other players to help them complete the quests. In the real world, you can avoid helping people, getting roped into social obligations, and hermit away from people. In MMORPGs the players are forced to interact. The amount of lifelong friendships, relationships, and partnerships that have formed from MMORPGs is astonishing.

What Makes a Virtual Reality MMORPG Different Than a Regular MMORPG

A “Virtual Reality MMORPG” allows the player to interact in the game world using some combination of head mounted display, audio and input devices, in order to achieve an even higher level of immersion. The level of achieved integration depends entirely on the users choice of virtual reality devices, and the game’s own capabilities. Some headsets possess the ability to track a users eye movements, allowing a deeper connection to other players, and NPCs or Non Playable Characters. Instead of pushing a button, simply making eye contact with the NPC  will trigger their preset dialogue, or other programmed actions. Other devices have an externally rigged camera, or additional items the player will wear that tracks the users own physical movements. This allows the players to control their avatar’s movements with their own body, all while the player is fully viewing and interacting with a virtual environment so lifelike that its easy to slip grip on reality.

There have been no major announcements from the big studios regarding any upcoming releases with support for HMD services or utilizing the power of virtual reality. There have been some crafty individuals online who have created modifications to allow devices such as the Oculus Rift DK1 to be integrated into game play on select titles. This is still far from a fully polished experience but does give a glimpse at the potential of this upcoming genre.

Sword Art Online is one of the most anticipated developer integrated virtual MMORPG experiences since it was first shown at Anime Expo 2014. Sword Art Online the game is based off the television anime Sword Art Online, where in the anime people put on the  “Nerve Gear” VR headset which allows the characters in the to virtually battle. The Oculus Rift will allow users to achieve the exact same experience. put on the mask, go into the virtual world, kick virtual ass. 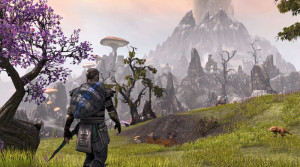 While not developer integrated, The Elder Scrolls: Online has been confirmed as compatible with the Oculus Rift. A program called TriDef 3D is allowing users to make TESO’s first-person view into virtual play-scape. The merging between virtual reality and MMO are breathtaking. Being able to look behind you for enemies, lean around trees, and staring into the vast expansive world created by Bethesda are all glorious perks for virtual reality gaming, however the Oculus Dev Kit’s graphics max out at a clunky 720p, making reading any text, dialogue, or information a grueling task. Hopefully with the launch of the official Oculus Rift we will see more games open up their possibilities. 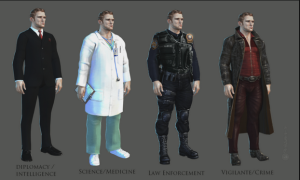 While most game developers pick one genre or two sub-genres of games when creating their work, Xvirent, a Kickstarter funded video game, has decided to break all the rules and conquer almost every genre in their self-named project.

In Xvirent the users are empowered to create their own quests, background stories, physical attributes, and skill sets. The houses developed in the game by the users are completely unique and their own. Xvirent aims to please. Their massive online multiplayer initiative includes first-person shooters, real-time strategies, and full social network support.

For those looking for a tamer front with MMO gameplay and virtual reality, look no further than Voxelnauts from the folks at Retro Ronin.

Based off the hit game franchise, Minecraft, Voxelnauts is a large scale MMO universe that contains thousands of planets created not just by developers, but the players themselves.

Climb mountains, make your way down elaborate rivers that lead to complex caves and dungeons all while battling some of the cutest and scariest chunky pixel monsters. The game was being crowdfunded via KickStarter and nearly reached its goal, but sadly missed. However, Retro Ronin has promised their eager patrons that the show will go on and the game will hopefully launch next year. 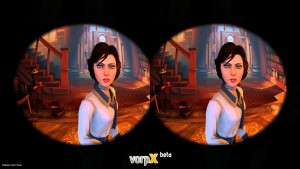 If you happen to already have an Oculus Rift Dev Kit and are want to fully try out its capabilities, download Vorpx. It is currently the only platform compatible with DK10 and DK 11 games such as various Call of Duty games, Bioshock: Infinite, and Battlefield’s 3 and 4. Yo

The list of other games it supports that aren’t exclusive supports is massive. Popular titles include: Borderlands 2, Grand Theft Auto 5, The Elder Scrolls: Skyrim, Left 4 Dead 2, and Halo. The list of supported games is perpetually updated as the program advances.